Skip to content
The bearded vulture, King of the National Parks 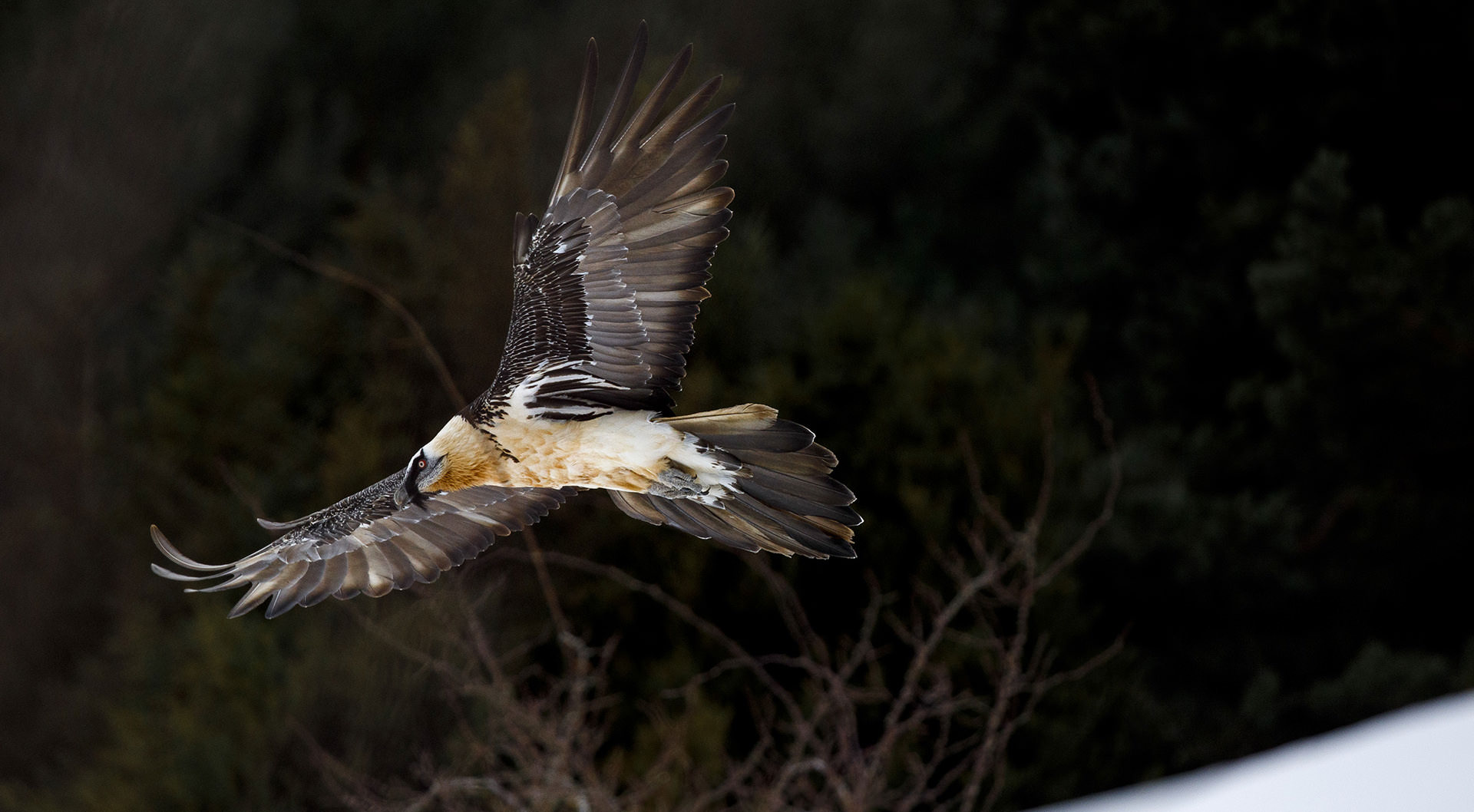 In 1995, there were 35 pairs of bearded vultures throughout Aragón. Now they have tripled and the specimens released from Ordesa have begun to colonize the Picos de Europa

This is how a species is saved from extinction, by Miguel G. Corral

The return to life of the most threatened vulture.

After one of her companions split the big cow bones with the ax, Miranda scatters goat legs and the freshly cut pieces in a meadow near the semi-abandoned village of Escuaín, next to an old hut now in ruins. They way so much, that the guards have to transport them up there from the SUV with a mechanical caterpillar wheelbarrow. Twice a week, the workers of the National Park go down to Barbastro and even to Huesca for goat legs and bones to feed the bearded vultures in Escuaín’s muladares. The local butchers, who also contribute, do not have enough for the many dozens of griffon vultures, kites and bearded vultures that come down to the feast.

There is not a flutter in the sky. When they finish dispersing the bones over several hundred meters of terraced land with few trees, Miranda says: “Is that it? Let’s go back”. The guards and workers of the Ordesa National Park just retire a few dozen meters to a small patch of forest and in a few minutes the sky is covered with griffon vultures, kites, corvids and bearded vultures.

Miranda identifies from the air the bearded vultures that are marked with color codes on their wings: “That looks like Asterix, blue on the right wing and red on the left, and there is Benia, yellow and pink”, she says without leaving the binoculars. Within a moment there are about 20 specimens in one glance.

The same scene at this feeding point now repeats itself twice a week, but was unbelievable only 20 years ago. In 1995, there were 35 couples in all of Aragon. Now, there are 89. In Europe it is the largest population, but this animal is also present in Turkey and especially in the Himalayas of Pakistan, Nepal and India.

Reaching this point has not been easy, as the people in charge of the Foundation for the Conservation of the bearded Vulture tell us. This animal has been besieged by very different dangers until the 90s: poaching, power lines, poison and even the molestation in times of breeding by hunting parties or by climbers or visitors. So the work began attacking the very high mortality that the species had. Now, the population grows at a rate of 4.5% per year.

“The population has almost tripled. If we were told that in this period we would achieve this situation, we would not have believed it”, says Óscar Díez, secretary of the Quebrantahuesos Foundation and director of the Aínsa Eco Museum. And for years, specimens have been exported to Picos de Europa, where the species became extinct about 70 years ago.

In fact, last year this project of reintroduction released a female named Centenaria with a wink to the 100 years that are celebrated by the two oldest Spanish national parks,  Picos de Europa where the specimens are released and Ordesa, where the released birds come from and whose centenary is celebrated on August 16.

“In the Cantabrian mountain range we are talking about a complete extinction. We started from scratch. This means uncertainties” says Gerardo Báguena, director of the project of captive breeding and reintroduction in Picos de Europa.

The bearded vulture is a very long-lived species – can reach up to 40 years in captivity – but it does not begin to breed until nine or 10 years of age. It has only been eight years since the reintroduction project started releasing specimens in Picos de Europa, so, for the moment, only two specimens have reached adulthood. And, yes, they have formed a couple, the only pair of all the new territory.

“Deva, a female who was released at one year of age, and Casanova have formed a very stable, close-knit couple,” explains Báguena. “The male came flying freely from the Pyrenees and, finding a single female and already of breeding age, settled there and courted her,” says the person in charge of the project. They have built a nest, the first in the Cantabrian mountain range for more than half a century, have laid eggs and a chick even hatched, which unfortunately died shortly after birth.

[foto 1 :A young bearded vulture, with dark plumage, in the valley of Escuaín. Alberto Di Lolli ]

However, experts say that it is now that the couple begins to have enough experience to start raising their chicks successfully. “This year, with 11 years old Casanova and nine Deva, they are starting to act with experience,” says Báguena. In Picos de Europa there was not a single specimen in 2014 and now there are 21 bearded vultures, two of them already in pairs and two others, Atilano (six years) and Esperanza (four years), who will soon be able to form a couple.

“We have been collaborating with Ordesa for some time.  They have been so kind to grant us specimens bearded vultures and now we think we have a population on the way of being viable,” says Mariano Torre, co-director of the Picos de Europa National Park. However, to be able to talk about a complete success and to trust that the species will be able to fly solo in the Cantabrian mountain range as it does in Ordesa, the natural reproduction of the reintroduced birds has yet to be fulfilled.

All the specimens are marked. In the same way that Miranda identified the animals in the gorge of Escuaín by the color markings on their wings, those released in Picos also have their own color code. “It is important to know if what we do has value or not,” explains Báguena. They are not only identified by these markings on the wings, but they are also equipped with radio tracking devices, transmittors that generate 200 very precise geolocations every day, which allows researchers to reconstruct the routes, feeding areas and habits of each individual in great detail.

It is precisely this technology that caused two specimens to be located a few weeks ago, two females, Carlota and Julia, killed by a poison prohibited since 2007. “Thanks to these geolocators we were with the Civil Guard able to reconstruct the three hours of life of the animal before death and find out where it could ingest the poison, and this took us directly to the farm where the poison was,” says Báguena.

[foto 2,  A bearded vulture swallows a lamb’s bone at the feeding point managed by the guards of the National Park. Alberto Di Lolli]

The deaths of these two female bearded vultures are only the tip of the iceberg. Their bodies were located due to the transmitters, but other contaminated animals appeared along with their bodies, which would have been impossible to locate in any other way. “In the case of Carlota, there were five griffon vultures and a dog next to her corpse. There are anonymous deaths by poison every day,” says Báguena.

This is paradoxical because the person in charge of the captive breeding project remembers that it started with “picking up corpses”. “We went down to nests and found  dead chicks or eggs. They had been viable specimens that had died from avoidable causes,” he says. For that reason, the foundation began to exert pressure so that no animal should die if it could be avoided. “We started to identify the nests and remove the eggs, but it was always our design to return them to nature.”

In those years, before the beginning of the reintroduction program, Báguena traveled to Argentina to learn the techniques of hacking (raising wild birds in semi freedom) that were already applied there for the recovery of the Condor. For two months he was learning how to raise the chicks without their real parents. “The same thing was going to happen to the bearded vulture, we were going to be their dads,” he recalls. “I adapted the technique of breeding of the Condor to the characteristics of the bearded vulture to be able to recover a chick that was going to die and make it viable to return it to nature.”

The specimens bred and returned to nature are removed from the nests when they are still inside the eggs. “It is a very delicate operation,” Báguena says. “We go down to the nest with the agents of the Mountain Rescue and Intervention Group of the Guardia Civil or with the forestry guards of the Government of Aragon because the technical difficulties to access the nest in large rock walls sometimes  are very great.” Báguena goes with an incubator on his back. The extraction is done in winter, in January, and sometimes the ambient temperature is nine degrees below zero.

[foto 3, A National Park worker chops up some bones to feed the birds within the protection program of the bearded vulture. Alberto Di Lolli ]

“We have to take the egg without turning it or moving it, at a constant temperature of 36.8º, sometimes there are 40 degrees of difference. I still get very nervous when I have to go down to a nest”, he acknowledges. Despite the difficulties, Báguena says they have never lost an egg or a chick. “It may sound strange, but we have a success rate of 100%. No bearded vulture has ever been lost on the way.”

For years this project has had the financing of a European Life project that has also had the support of institutions such as the Biodiversity Foundation of the Ministry for Ecological Transition. But the scope is already widening and the next initiative that will be presented to Europe will be to see bearded vultures again flying in the Central System, for which they have collaborators such as the Banco Santander Foundation or the Endesa power company, among other partners.